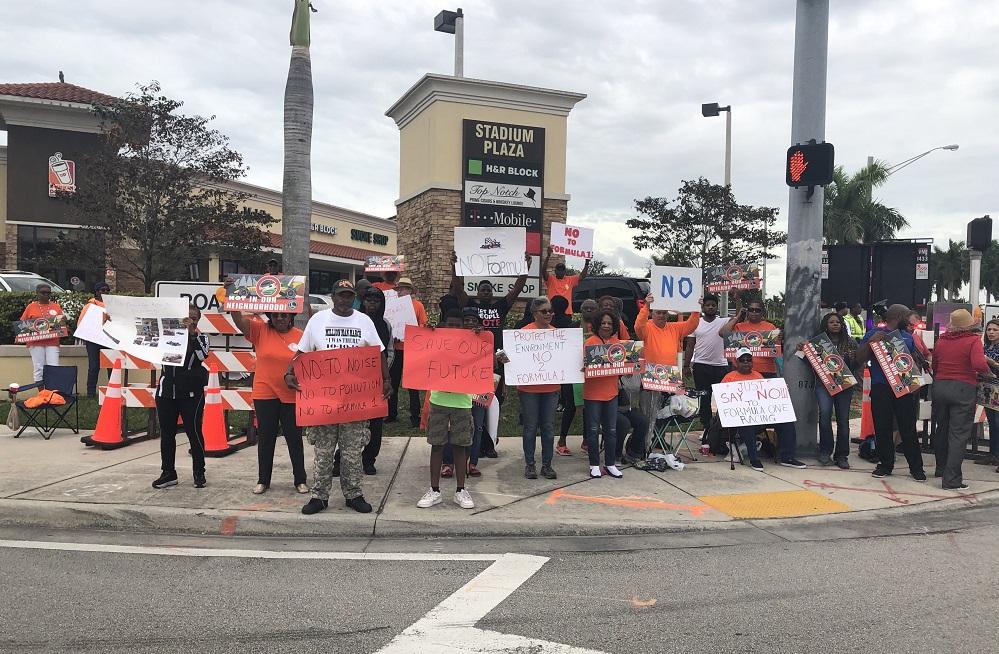 Miami-Dade County Commissioner Barbara Jordan will attend the rally, doubling down on her staunch opposition of F1 racing at Hard Rock Stadium following an overwhelming rejection of the plans by District 1 constituents. In October, Commissioner Jordan sponsored a resolution that would mandate County Commission oversight of motor vehicle racing, including a public hearing and local impact studies. The resolution passed, however, County Mayor Carlos Gimenez’s subsequent veto of the resolution was sustained in November.

Since its inception, the F1 Racing circuit has ultimately been rejected by numerous host cities due to health concerns, the environmental impact and inconveniences of hosting these events. Earlier this year, Formula 1 and local organizers gave up on plans to hold a race in downtown Miami because of the disruption for businesses and residents. Shortly thereafter, Hard Rock Stadium owner Steve Ross invited F1 to hold the race in Miami Gardens.

Miami Gardens residents who live within a two-mile radius of Hard Rock Stadium would experience the bulk of public health issues related to the race.

Exposure to dangerous noise levels, air pollution, traffic inconveniences and road closures are among the  chief concerns for Miami Gardens residents and local officials. The City of Miami Gardens Mayor Oliver Gilbert and City Council voted unanimously to object to the race on October 23rd. The alleged economic impact, historically inflated by F1, has largely formed the basis of Mayor Gimenez and Hard Rock Stadium’s defiance of the unprecedented local consensus against the race.

Residents within at least a radius extending 1,463 meters (~1mile) from Hard Rock Stadium can expect to experience peak noise levels due to the proposed race alone of at least 106 dBA, according to the acoustical engineering firm Leider Acoustics. This radius is particularly critical because it includes Norwood Elementary School, and extends to NW 32 Avenue on the West, 207th Terrace on the North, 13th Avenue on the East, and NW 183rd Street on the South. According to the American Speech-Language-Hearing Association (ASHA), noise levels above 85 dBA are dangerous to hearing.