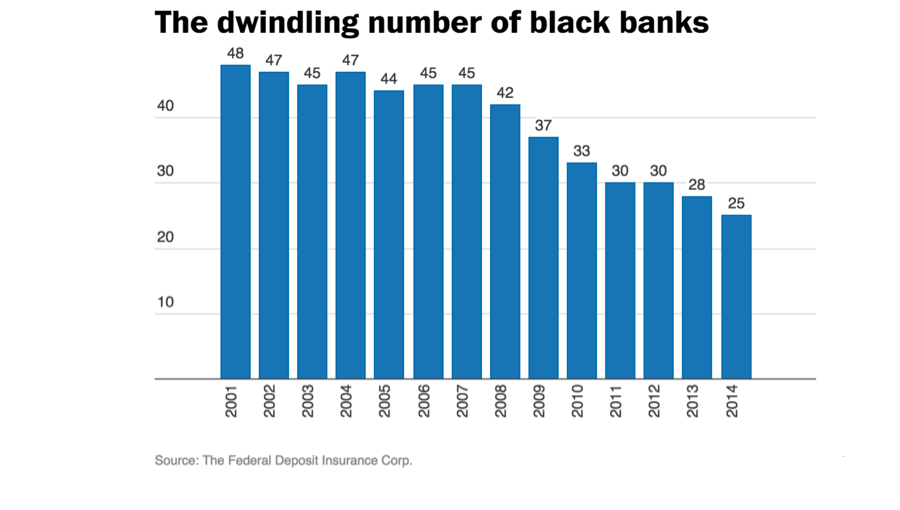 We Need Our Black Banks

My good friend Frank Odum wanted Black Citizens of Sumter County Ga to start a community Bank. So he preceded to go ask the local Black pastors to support him in the idea and none of them would. He told me, "none of them offered any support, what are they afraid of"? As I reflect on Frank's vision, I sympathized with him and tried to offer him comfort as a friend.

At that time, I understood his passion, but I didn't understand his vision. As I have come to understand what true Black Liberation is and how it equates to true economic freedom, my good friend's words resonate strongly with me. Frank understood what the importance of having a Black Bank in our community would have meant for empowering us. I have come to strongly recognize that Black Banks are so crucial to the Black Community. There are only 20 Black- Owned Banks in the United States. This should give African American communities pause for a grave concern. When Black Banks close down, African American communities suffer harsh consequences and our neighborhoods become poverty stricken. Mainly because we are left out of the financial loop, we are unable to finance our businesses that would produce jobs and hire our unemployed or secure funding for home loans creating the economic stability that we need for our survival. When we lose our Banks, we become prey for the abusive tactics of the pay day loans and check cashing operations that leave our people in massive amounts of debt. The major culprit of the loss of Black Banks is the nonsupport from African Americans. Our hard earned dollars do not stay in our communities long enough to generate the recycling of our dollars or we just dismiss the notion that somehow Black Banks are not acceptable and are dismissed by our people. Our spending power is estimated at 1.1 Trillion dollars, yet the black dollar only recycles itself six hours in our communities and only two percent is spent with Black Owned Businesses. By and large, we just simply cannot afford to overlook the devastational effect and havoc it wreaks to lose a financial institution that serves as a lifeline to the underserved Black community.  By not supporting Black Banks, we are essentially throwing away economic security that would enable us to live financially empowered lives where we as people can greatly benefit if only we try. The deaths of our two brothers Philando Castille and Alton Sterling spurred the #BankBlack Movement and over 20 Million Black people made the move to invest in Black-Owned Banks; however, it should not take a tragedy for us to be proactive in having an elevated conscience to empower ourselves and make better choices. Being reactionary will not help us to achieve the long-term results that we need but being consistent and committed to the struggle will. Let's do this!!!