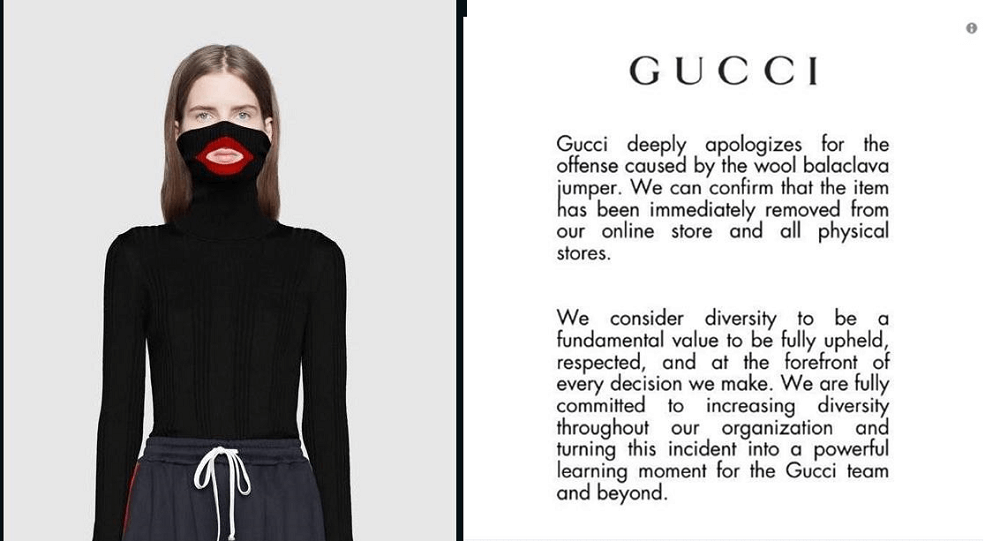 Will Black People Continue To Use Gucci As A Symbol Of Status After The Blackface?

Gucci has become the latest designer to upset the masses of black people with it's latest apparel. About a year ago or so it was H&M who had blacks in an rage when displaying an ad with a little black child in a garment which had referenced a monkey on the front of it. Many blacks called and agreed to boycott H&M to send a message of disapproval. This incident with Gucci is very different in many ways.

Black people have a different relationship when it comes to Gucci. Gucci  doesn't just represent an apparel, with regards to black people it is more of a symbol of success. Rappers often create lyrics which boasts about their Gucci clothes, shoes, and belts. Social media is full of young black teens and entertainers showing photos of themselves in Gucci apparel, or in stores purchasing Gucci bags and accessories. The conception is, "If you in Gucci, you got money," as the cost of their products are extremely expensive relative to most of the black people purchasing the items.

Gucci recently released it's Balaclava knit top black sweaters which resemble a person in black face. Black face, simply put, is a white person using a black polish to make their facial skin black in an attempt to make fun of black people and their features. This sweater was the latest item to send black people into rage and call for a boycott. Gucci has since discontinued the sale of the item and issued an apology.

The perception is that Gucci deliberately disrespected blacks with the Balaclava line, but will that perception be enough to remove it from a symbol of status? There are millions of black people each with thousands of dollars worth of Gucci apparel, will they be willing to discard their items? Will the rappers stop rapping about it? Will blacks show Gucci that they won't take the blatant disrespect? Wait, if not Gucci what can i wear to perpetuate the image that i have a lot of money?

Will this time be different and black people decide to make a true change, or will blacks again be temporarily upset and wait until the media blows over then return to being the loyal consumers that they are expected to be? Only time will tell.

There are black retailers and designers that sell clothing other than t-shirts. (see some here) There are plenty of websites which could help you find black designers and products if you are willing to take the time and make an effort. If blacks aren't willing to learn from the lessons presented, they will continue to encounter the same disrespect from corporation after corporation. Make a change and lets create more black millionaires. It's time START SUPPORTING BLACK BUSINESS and make someone wealthy who looks similar to yourself.